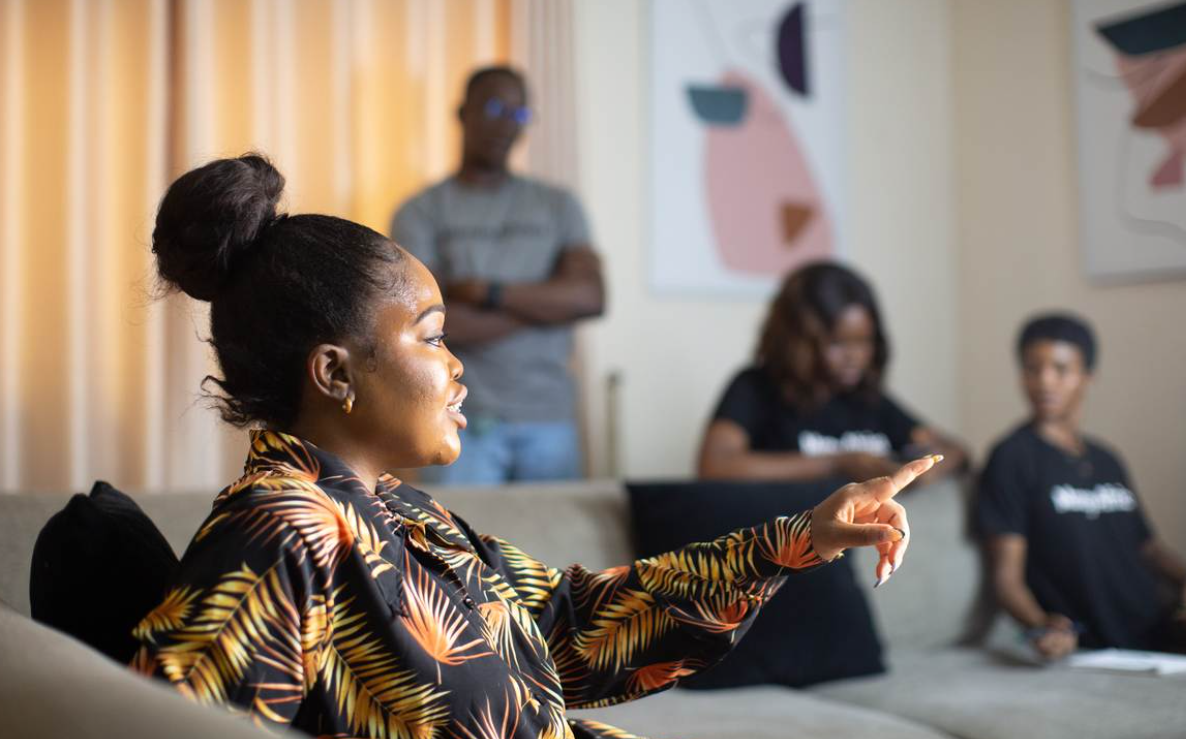 Female ‘techpreneurs’ are taking their place in Africa’s male-dominated fintech boom, but gender bias makes it harder for them to access finance and grow their businesses

NAIROBI, Feb 23 (Thomson Reuters Foundation) – When financial analyst Oluwatosin Olaseinde moved back home to Nigeria in 2013 after a decade studying and working abroad, she decided it was time to tackle her own finances, so started reading up on stocks and mutual funds.

Shocked at how little guidance was available for young professionals like herself, Olaseinde began sharing her learnings in fun, bite-sized tutorials on Instagram, and much to her surprise, her posts went viral.

“I had no idea my page would just blow up,” said the 34-year-old by phone from Nigeria’s commercial capital, Lagos.

“Just like me, there were young people who wanted to know how to manage their finances, but needed information in an easy-to-understand way.”

Collectively, the platforms have a 300,000-strong social media community and more than 15,000 active users. MoneyAfrica is projected to earn $1 million in revenue this year, said Olaseinde, and Ladda has $700,000 in assets under management.

From digital payments, loans and insurance to share trading and cryptocurrency, Olaseinde is among a growing number of female entrepreneurs in nations such as South Africa, Nigeria, Kenya and Egypt taking a lead in Africa’s fintech revolution.

Since pioneering mobile money services in the late 2000s, Africa has become a hotbed for fintech – financial technology – innovation with an explosion of startups vying to tap the region’s unbanked millions.

Last year, fintech companies attracted more than 60% of the nearly $5 billion in investments to African startups, according to market intelligence and research firm Briter Bridges.

For female entrepreneurs, however, getting their innovations off the ground is often hampered by gender biases that stifle their ability to access finance, gain exposure and grow their businesses, industry experts and women founders said. 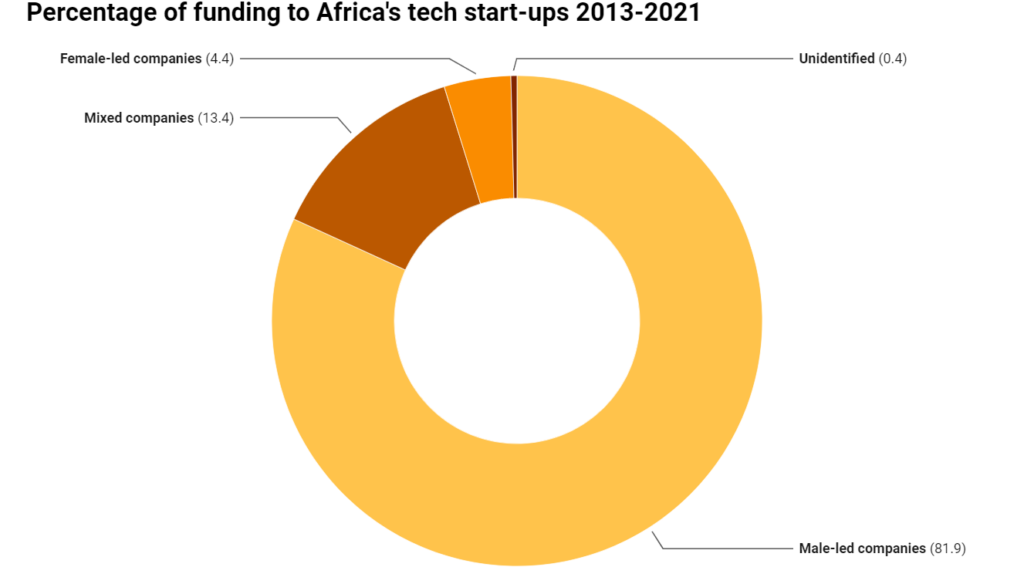 From 2013 to 2021, less than 5% of the total $12.6 billion in funding to Africa’s tech startups went to all-female founding teams compared with 82% to all male-ones, data shared by Briter Bridges showed.

BREAKING INTO THE ‘BOYS’ CLUB’

But while the sector is very much a “boys’ club”, research shows Africa’s fintech sector fares better than other regions when it comes to women at the top.

Around 3.2% of fintech firms in Africa are founded solely by women – double the global average of 1.6%, according to Findexable, a market research company that tracks gender diversity.

The continent’s fintechs also have more female board members compared with other regions, Findexable’s 2021 data shows.

“I became interested in insurance after having a conversation with a waiter who told me how he didn’t have medical insurance,” said Abass, 28, a former commodity futures trader at a London trading house.

Through its API, users can get a quotation for motor, medical, or other insurance products in seconds, then customize the benefits and adjust the premium to suit their needs and get their policy documents instantly.

Since inception, Lami has raised more than $1.8 million in seed funding and partnered with companies including Kenya Commercial Bank and e-commerce platform Jumia to sell more than 72,000 policies.

Lami now operates in Malawi and the Democratic Republic of Congo as well as Kenya, and also runs Griffin, a car insurance app fully built on the startup’s API. 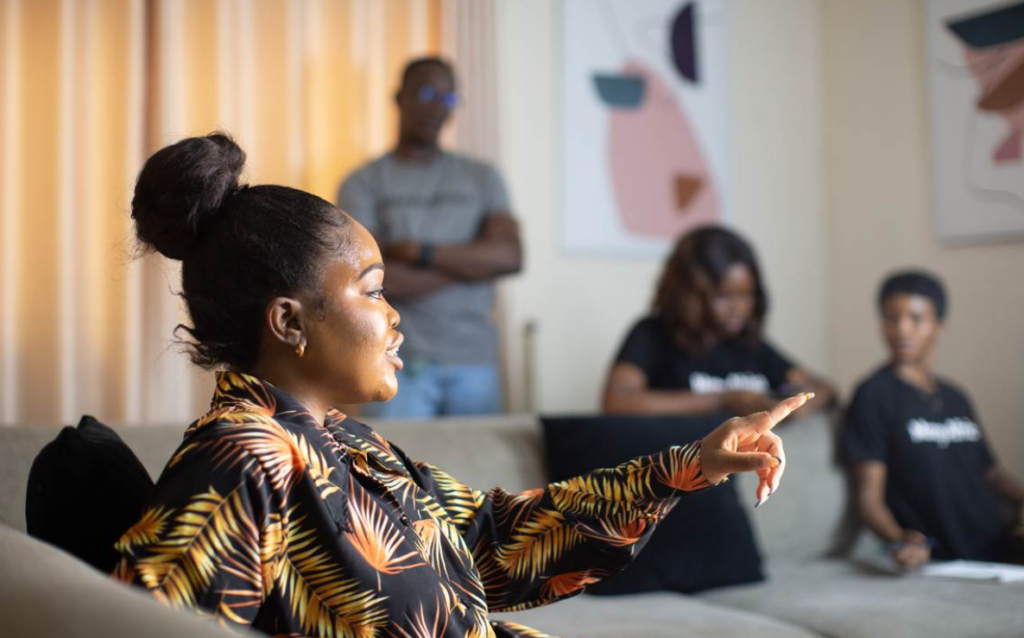 Oluwatosin Olaseinde, founder of Money Africa & Ladda, during an interview at her home in Lagos, Nigeria on Feb. 4, 2021. Thomson Reuters Foundation/Nengi Nelson

Launched in 2020, Okra aims to digitise financial services for Africa. Okra has built an open finance platform that enables developers and businesses to build personalised digital services and fintech products for customers.

“Essentially, we play the ‘middleman’ by enabling individuals and businesses to connect their bank accounts directly with third-party applications in real-time,” said Jituboh, 33, a former software engineer.

In less than two years, the startup has drawn more than 400 clients, including more than 20 banks in Nigeria, Kenya and South Africa, and has raised $4.5 million in venture capital.

But despite such success stories, many female fintech entrepreneurs struggle to attract investment.

The stark funding gap between male- and female-led startups in the sector is often attributed to the shortage of female “techpreneurs”, but some industry experts disputed this.

“It’s nonsense for investors to claim that there aren’t any women entrepreneurs in fintech to invest in,” said Martha Mghendi-Fisher, founder of African Women in Fintech and Payments, a non-profit with a network of thousands of members.

Female fintech founders said that even when they do have the opportunity to pitch to venture capital (VC) firms, gender biases mean they often raise less and receive lower valuations.

“I don’t think it helps that the majority of VC panels tend to be men who are white and much older,” said Faith Mokgalaka, founder of Johannesburg-based Puno, a digital platform enabling farmers to sell shares, or a portion of their next harvest. 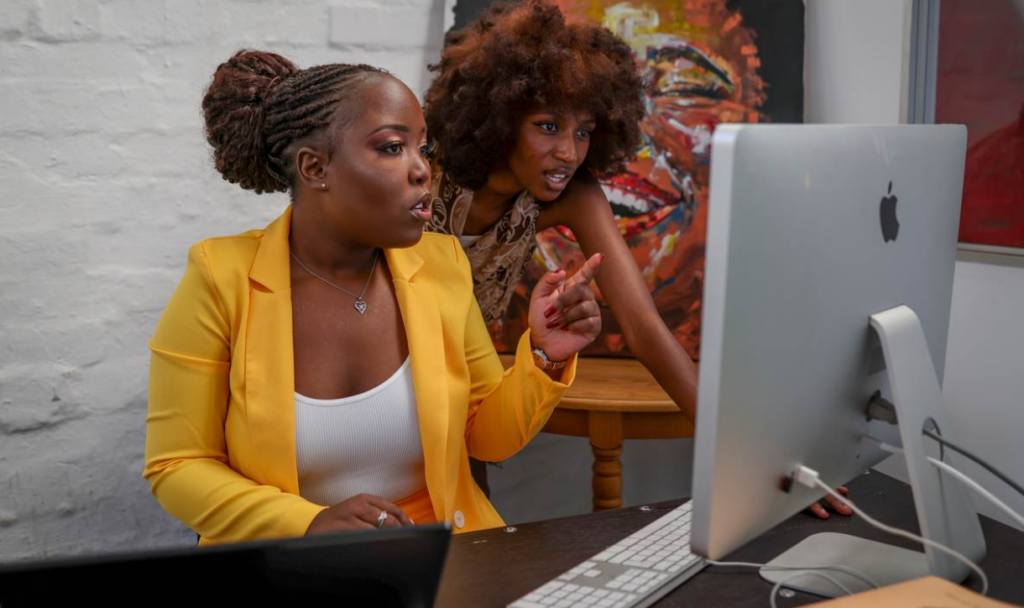 “They aren’t openly sexist, but you do feel there is more scrutiny on you compared to men. More questions are asked, additional documentation and due diligence is required,” added 22-year-old Mokgalaka.

An increasing number of accelerators – which provide early-stage companies with training, mentorship and financing – and venture capital firms are now shifting focus to women-led businesses.

The Catalyst Fund, an accelerator working with inclusive tech innovators, has supported 61 companies – more than one-third of them founded by women.

“The whole setup in the VC space such as the Q&A, the aggressive pitching, the need to demonstrate over-confidence has to change,” said Carraro. “We need to make the whole conversation more inclusive.”

“It’s a ‘tech bro’ environment, for sure,” said Delila Kidanu, 26, co-founder of Koa, an app-based savings and investment platform in Nairobi.

“It would be important to have some training on gender biases so that people can realize how their actions and decisions can adversely affect women entrepreneurs.”

(Reporting by Nita Bhalla @nitabhalla, Editing by Helen Popper. Please credit the Thomson Reuters Foundation, the charitable arm of Thomson Reuters, that covers the lives of people around the world who struggle to live freely or fairly. Visit http://news.trust.org)