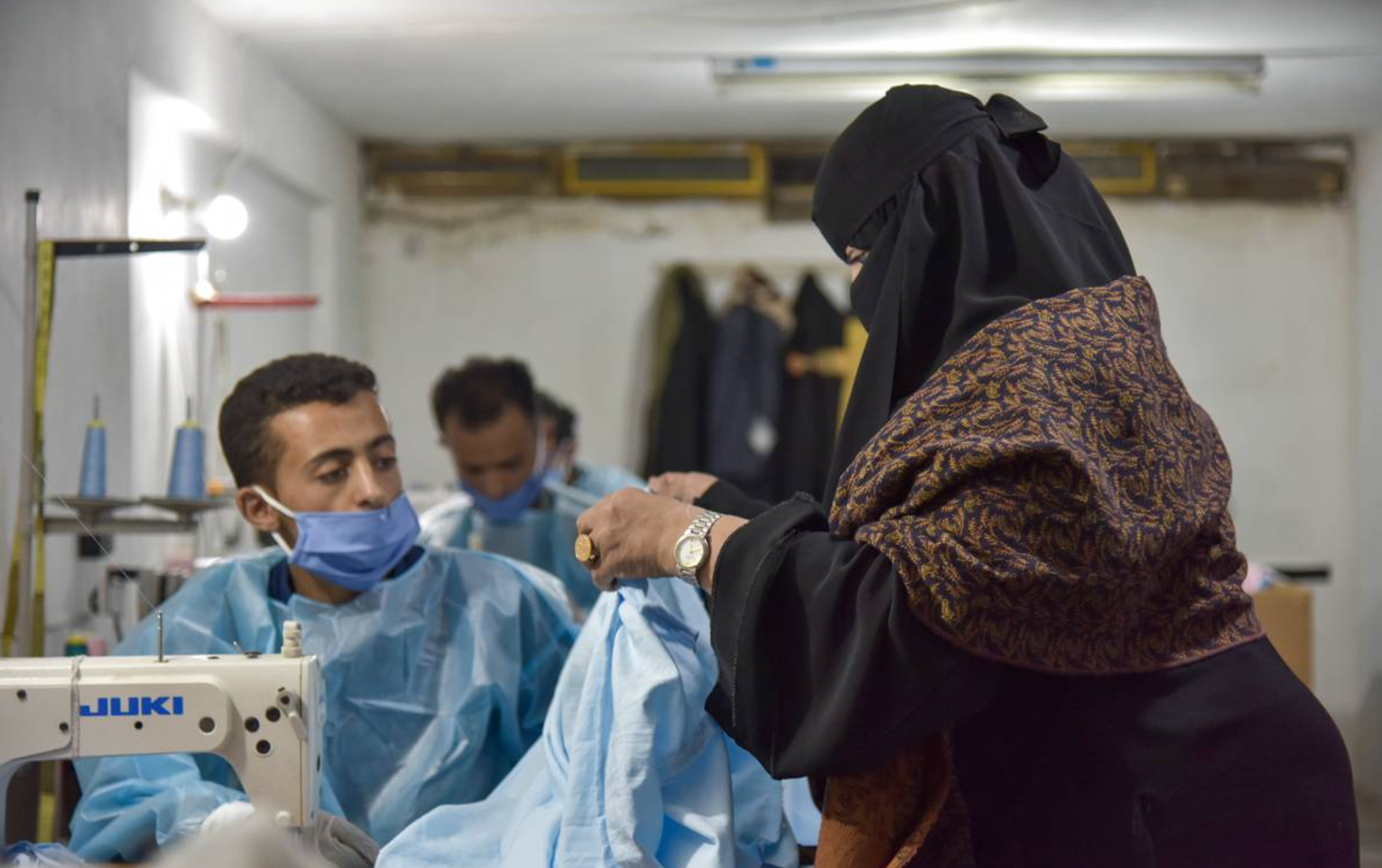 By We-Fi SecretariatFebruary 7, 2022No Comments

TAIZ, Yemen, Jan 31 (Thomson Reuters Foundation) – Short of masks and short of protective gowns, Yemen’s overstretched medical workers started dying from COVID-19. Nadia Dhrah – herself a doctor – was dismayed, so she resolved to do what she could to help.

Dhrah, who had set up a tiny business making surgical masks and clothing in 2019, thought her company could meet demand for personal protective equipment (PPE) more quickly than expensive imports amid a deepening currency crisis after years of war.

“Doctors were dying. Suddenly face masks were in high demand. We jumped into action and began producing as much (PPE) as possible,” Dhrah, who is in her 40s, told the Thomson Reuters Foundation from her factory in Yemen’s capital, Sanaa.

Despite the challenges of being an entrepreneur in Yemen, Dhrah is among a growing number of Yemeni women defying conservative notions about gender roles to open new ventures.

Her factory, which now employs 20 full-time staff, is one of scores of women-owned businesses that have adapted to the coronavirus outbreak and in some cases prospered during a seven-year conflict.

Yemen is embroiled in a war between a Saudi-led military coalition and the Iranian-aligned Houthi group.

The fighting has crippled its economy and healthcare system, and unleashed the world’s most urgent humanitarian crisis with millions facing starvation and diseases such as cholera, diphtheria and malaria.

COVID-19 compounded the problems of Yemen, the poorest Arab nation where less than 1% of the population have been vaccinated.

But with state bodies collapsing, female entrepreneurs across the country have stepped in to offer crucial services –  managing bakeries, running language and training institutes and establishing women-only cafes. 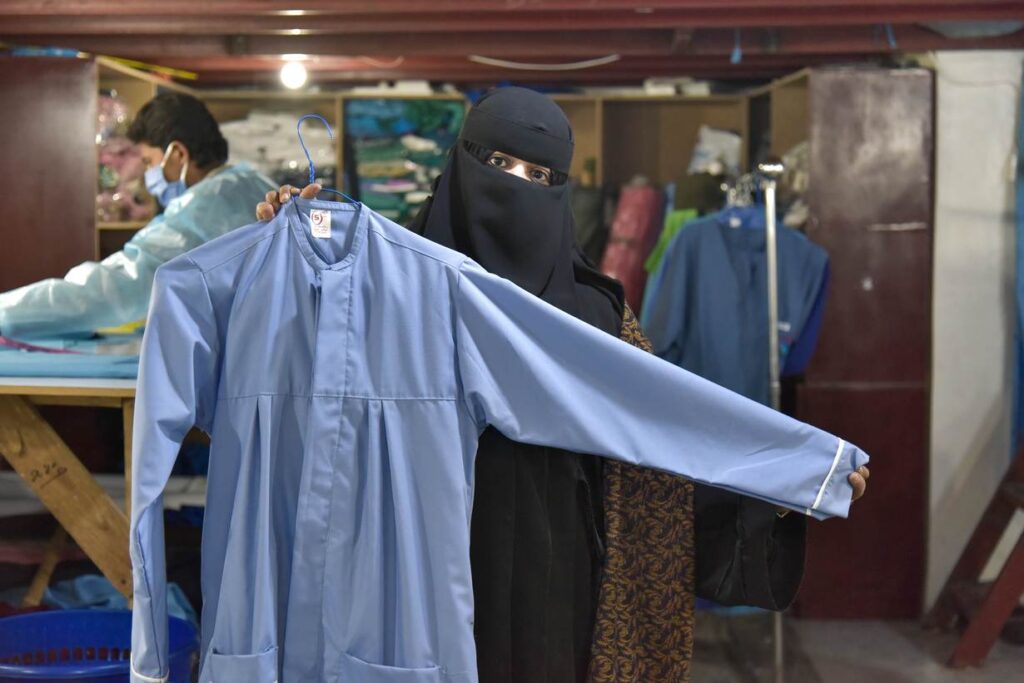 Nadia Al-Dhrah holds one of the medical outfits that was produced in her lab in Sana’a, Yemen on 30 December 2021. Thomson Reuters Foundation/Deyah Al-Mandi

“Society didn’t use to believe women could run businesses and underestimated their abilities for a long time,” said Faizah Alsulimani, partnership director at SMEPS, a national agency supporting entrepreneurship and business development.

“These exceptional challenges have seen women excel at business and change attitudes, inspiring other women,” she said.

The war has upended traditional gender roles as women business-owners fill a vacuum left by tens of thousands of men who have lost their government salaries or gone to the frontlines to fight.

Many Yemeni women have jobs, but cultural expectations maintain that men are the main breadwinners.

COVID-19 has also created new demand for products that women-led businesses are meeting.

Safia Omar, who runs an oxygen plant in southern Yemen, has been inundated with requests from hospitals for oxygen canisters to battle respiratory conditions brought on by the disease. 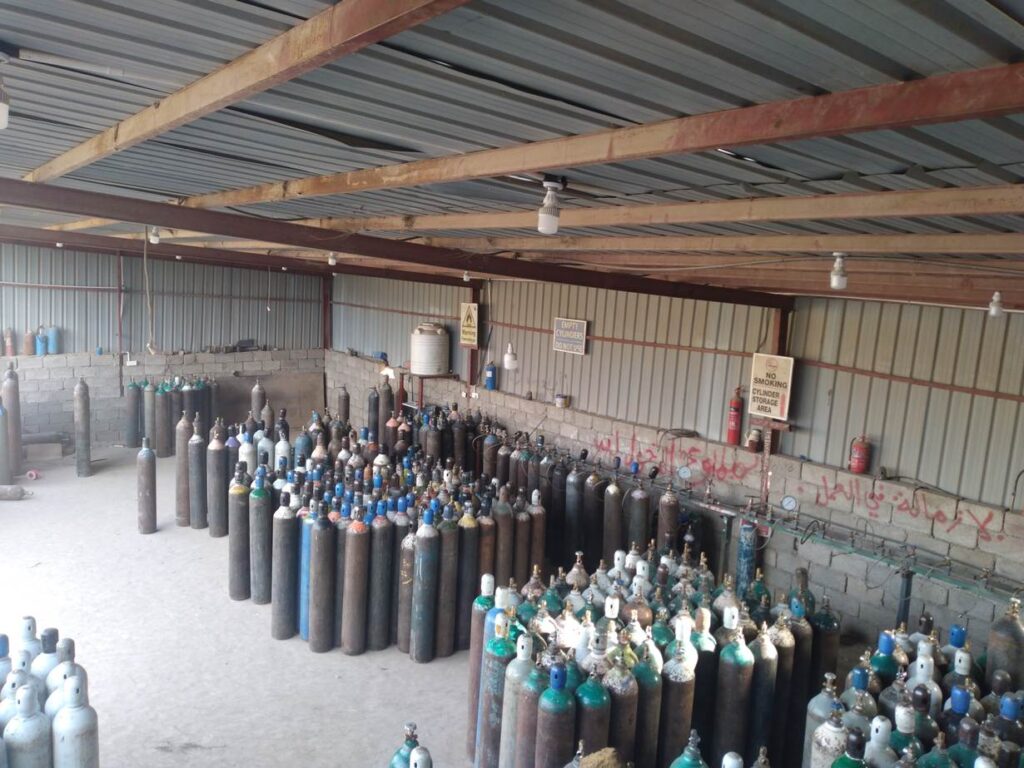 With shortages leaving desperate families of patients often paying exorbitant prices for imported cylinders, Omar has sought to ensure her oxygen is affordable.

The factory she runs with her sons has tripled its output since the start of the pandemic and now produces more than 100 cylinders per day, selling them to hospitals and quarantine centres.

“Demand during the pandemic helped me grow my business. Some firms have gone bankrupt but mine grows larger every day. I’m proud,” she said by phone.

Women entrepreneurs have struggled to get their businesses off the ground due to a lack of access to finance.

Banks usually require commercial guarantees from borrowers in order to give out loans, which many women struggle to fulfil.

A donation from SMEPS helped Dhrah scale her business up from a single sewing machine to a team of workers producing more than 1,000 face masks and 100-150 protective outfits per day.

While working as a teacher, Muna Mohammed noticed the desire among women and girls around her to acquire skills that would allow them to generate income. 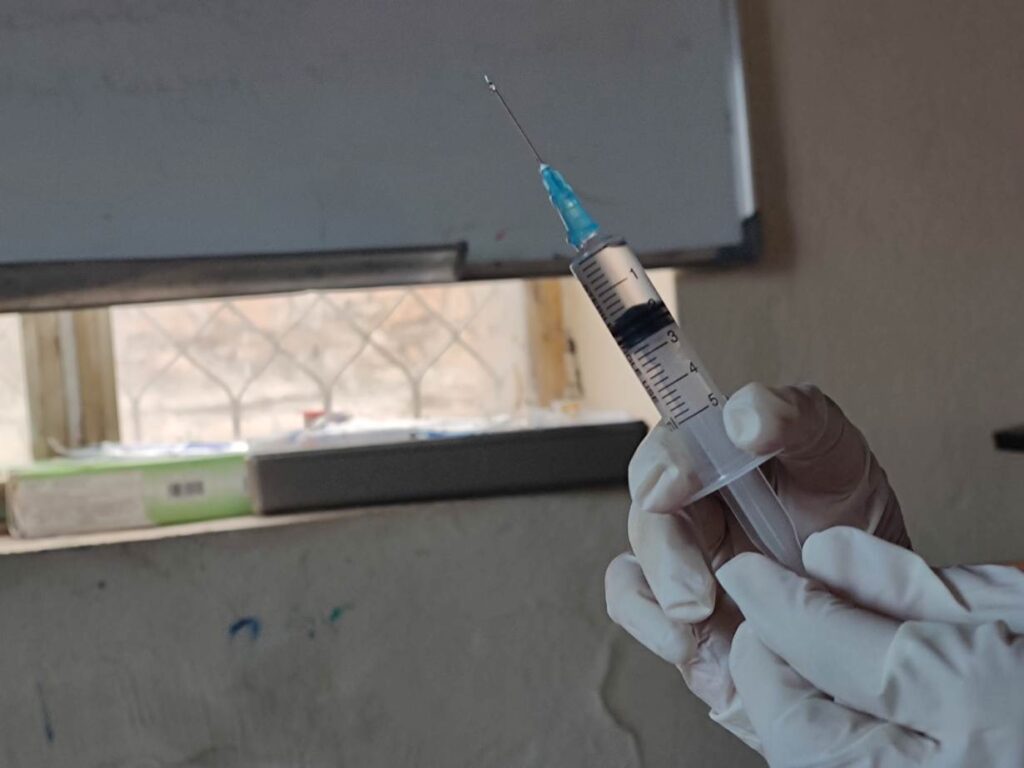 When the Education Ministry stopped paying her wages and the salaries of thousands of other teachers in 2016, she used her savings to open a private institute teaching women computing, sewing and first aid.

“Many women have already started using these skills to find jobs,” she said.

Mohammed wants women in Yemen to start their own businesses so they can provide for their families and meet the needs of female customers.

“I foresee many women starting their own firms in the future because women have already broken taboos and entered the market with their own projects.”

(Reporting by Amal Mamoon; Editing by Tom Finn and Helen Popper. Thomson Reuters Foundation is the charitable arm of Thomson Reuters, that covers the lives of people around the world who struggle to live freely or fairly)