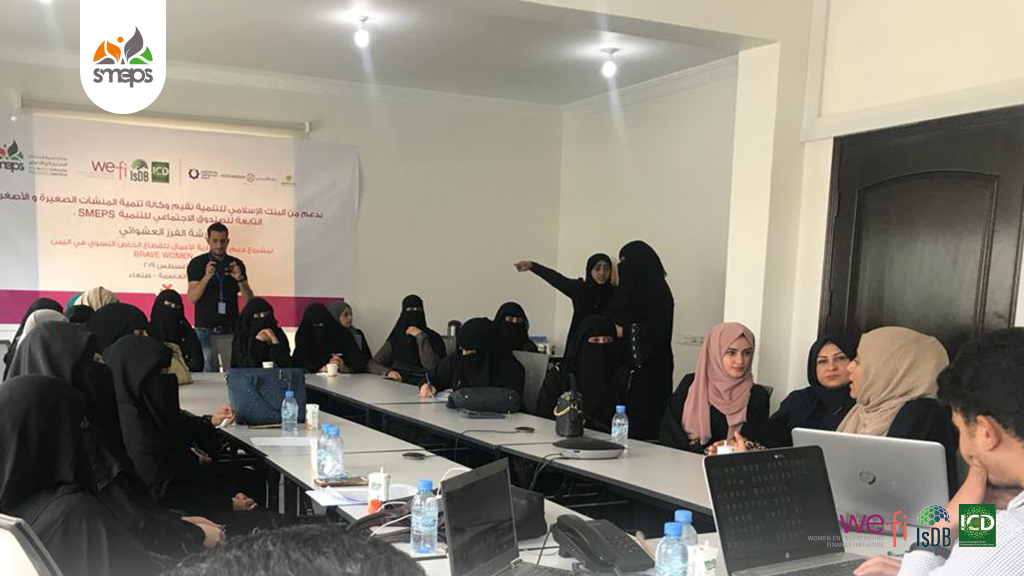 The international community describes the situation in Yemen as “the worst humanitarian crisis of the century,” where the effects of the armed conflict have crippled all economic sectors, especially small and medium women-owned businesses. The City of Taiz, located in Yemen’s most populated region, was once the cradle of educated professionals and business pioneers, but is now lagging behind, as it is the most war-affected zone in the country.

Education as a victim of war

The ongoing clashes inside the city have affected much of the basic services, including education. Most of the educational institutions have turned into ruins or sites of exchange of fire. Mrs. Elham Haidarah, who experienced the dramatic effects of her country’s transition, says that “We went through difficult periods that forced us to close some branches of the school to protect students”. The livelihood of civilians in the city of Taiz have become very difficult, especially with the stop of salaries for the fourth year. Mrs. Nasim al-Qurashi described a school she visited: “After the clashes stopped in the area, I went to the school building and I was hoping that the damage would be minor. I arrived at the site and there I saw a nightmare in front of me. The whole school with its equipment was destroyed by fire and what survived was stolen.”

Women standing against the fear of destruction

Women entrepreneurs decided to stand brave against the fear of destruction. The current circumstances have prompted more women to insist on maintaining existing businesses and even start new ventures to support their local communities. Mrs. Nasim al-Qurashi added: “I decided to come back strongly because education is the first path of change and the next generation is in great need for education. I know very well that the challenge is big, and the journey is long and difficult, but what we are going through urges us to continue our work at all costs and with all available resources, no matter how simple and modest.” This requires a review of the operational costs of private education projects to make it more affordable and sustainable. Mrs. Ilham Haidarah explained: “I decided with teachers to continue our journey with the lowest costs that allow students to join private classes. With the increasing rate of moving to Taiz, we were obliged to provide educational services to new students and give them the choice to build their future and not engage in armed activities”.  Mrs. Fathia Ali, who lost her small project of a school serving 800 students, said: “I found in every difficulty or challenge the bravery to lead the whole team to raise and perform again.We were able to resume our activity in the labor market“. Fathia managed to reopen the school and accommodate 250 students, without any technical assistance or financial support.

Listening to the voice of Women Entrepreneurs in fragile situations

It was important for us to transfer such field observations to the BRAVE WOMEN project teams and the international donors. Despite the logistical/security difficulties and poor communication means, an open dialogue and live broadcast was arranged between the team of ICD, the private sector arm of IsDB and the women entrepreneurs on the sideline of the Business Continuity training courses. This was the first phase of BRAVE WOMEN project response to the needs of the businesswomen within the SMEs sector in Yemen. When the trainees were asked by the ICD team about “what distinguishes the BRAVE WOMEN project from other support programs for the sector?” Mrs. Azza Shoukry, owner of Sabaya ready-made garments project, replied: “During the previous periods, there were some different programs to support businesswomen, but what distinguishes BRAVE WOMEN is that it is an integrated program that provides training in business continuity and helps us develop an integrated plan and then offers us grants under the supervision of a specialized consultant until the implementation of the plan”.

Another participant asked “What will be there after this round of support? Will businesswomen be left to face the challenges?” This question highlights the sustainability aspect that we must work on as development institutions. “Implementers and beneficiaries should work as a team to encourage further interaction by financial institutions and local banks to target and serve the neglected women entrepreneurs”, the ICD Team replied.

Women have great enthusiasm and courage to continue and move forward despite the difficulties they face from crippled regulations. Mrs. Nahlin Abdul Latif, the owner of a private nursery and kindergarten, narrated her experience after being selected for BRAVE WONEN support, “I have a kindergarten that can accommodate 600 children, including those with special needs. My project expanded until the war came and the nursery was completely destroyed. I was forced to flee to another area. As a woman, I was unable to get permission to open high school classes. I then worked hard and was able to persuade the local authorities to give me the necessary approvals, and here I am offering educational services to female students and wish to expand and contribute more to the change with my project.”

We have seen a lot of businesswomen in Yemen investing in private education during the implementation of the BRAVE WOMEN project. The share of educational services supported to date reached 20% of the total eligible firms. During the first phase of the project, 500 businesswomen were trained in business continuity during high risk periods. The financial support is now being prepared through matching grants for successful projects.

As we are all hoping for the end of the conflict through a political process, Yemeni businesswomen have another perspective. It is highly remarkable for us as development partners that women are more aware of the importance of confronting the severe effects of the conflict through investing in the continuity of quality education as a means of creating awareness and an effective tool for restoring peace in the long run.