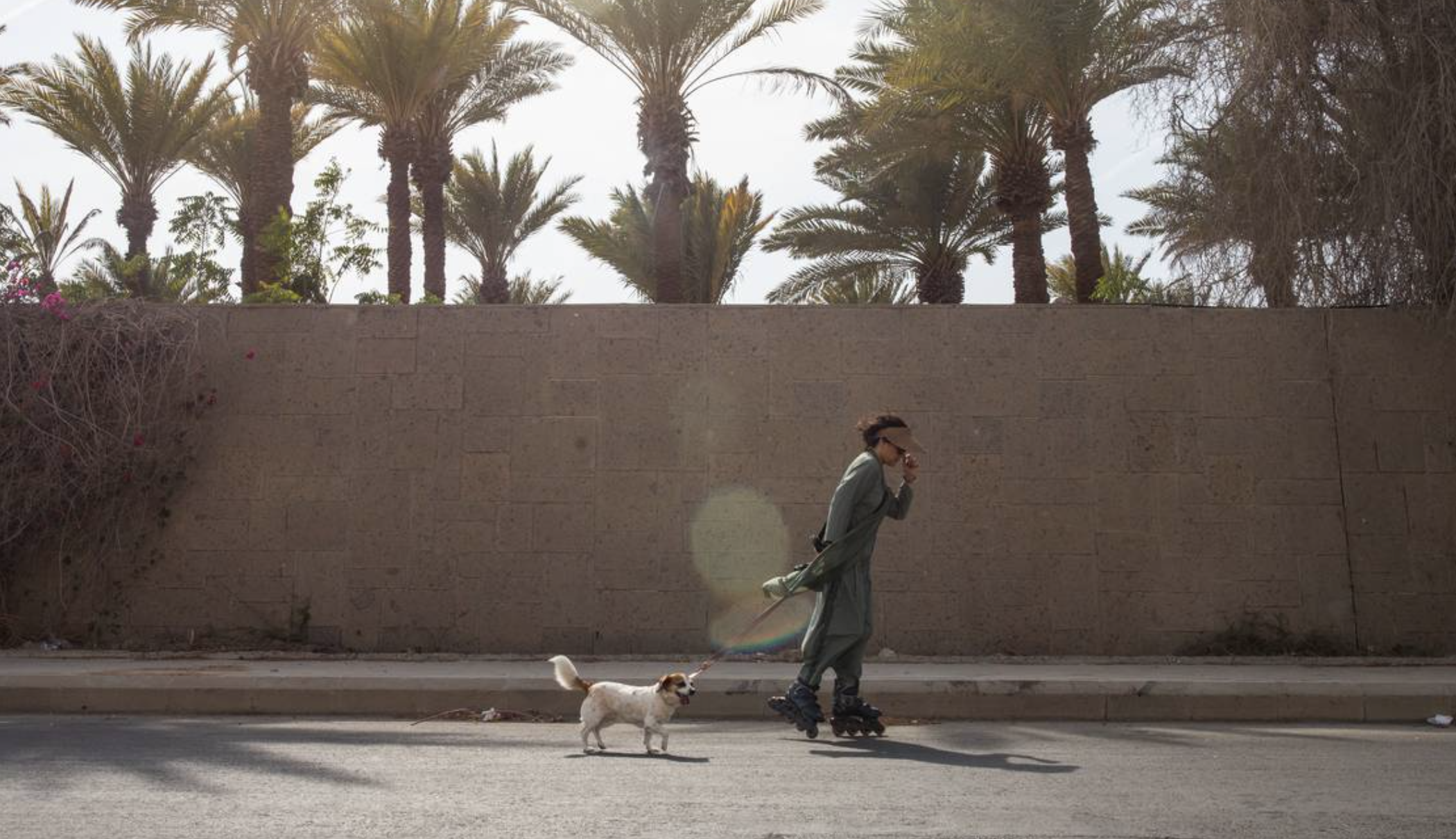 By We-Fi SecretariatMarch 9, 2022No Comments

Cover image: A Saudi woman, Dana, roller-blades in her neighbourhood with her dog in Jeddah on March 4, 2022, wearing a sports abaya made by Saudi designer Eman Joharjy. Thomson Reuters Foundation/Iman al-Dabbagh

Businesswomen from Saudi Arabia to Lebanon are launching their own activewear brands, facing down gender taboos and economic challenges during the pandemic

BEIRUT, March 8 (Thomson Reuters Foundation) – Nathaly Daou zigzags through an underground fabric store in Beirut, pulling out bolts of neon Lycra and patterned polyester before settling on a roll of white cotton.

Finding affordable fabric for her budding sportswear line during Lebanon’s economic crisis has been a challenge for the 36-year-old entrepreneur, one of several women making strides into the activewear sector in the Middle East and North Africa.

“We had all these imported brands, but I wanted to do something special – something different,” said Daou, who is also a professional photographer and pole-dance instructor.

She launched her line “NATUSUAL” in August 2020 – weeks after Beirut’s devastating port blast and nearly a year into the financial collapse that has put more than three-quarters of Lebanon’s people below the poverty line.

The currency has lost more than 90% of its value over the last three years, meaning imported fabrics either quintupled in price or were no longer available.

Rampant power cuts across the country delayed production by months and the banking sector had effectively collapsed, cutting off potential financing for her fledging business.

“It was impossible to create a business plan. I kept thinking, should I do it? But I’ve had this idea for 10 years, and I didn’t want to wait anymore,” Daou told the Thomson Reuters Foundation. 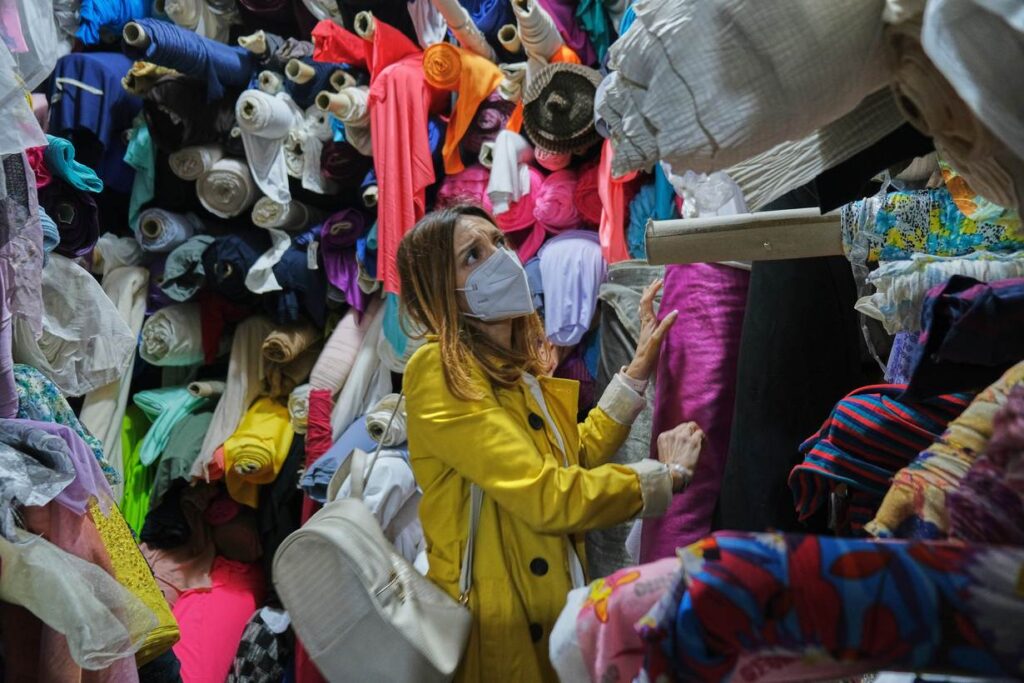 Nathaly Daou stands in a textile shop as she looks for cloth to fabricate sportswear in her studio in Beirut, Lebanon on February 16, 2022. Thomson Reuters Foundation/Ibrahim Chalhoub

She hunted down affordable fabrics across the city, spread news of her line through her pole-dancing network, and initially priced her pieces in Lebanese pounds to keep them affordable.

“I had a vision of a Lebanese brand priced in pounds – but in the end, even my tailor was asking to get paid in U.S. dollars because his own expenses had gone up, too. I had no choice.

Across the Middle East and North Africa (MENA), just 5% of formal firms are led by women. For every female entrepreneur, there are another six women who want to start a business but do not manage to achieve their goal.

Small and medium-sized enterprises led by women in the region have long struggled to access sufficient financing, according to the World Bank, which said the situation had become “even more dire” during the COVID-19 pandemic.

Tunisian business owner Fatma Ben Soltane, who launched her sportswear line Fierce in 2019, has struggled to scale up due to a credit crunch during the pandemic.

She did access some funding through Flat6Labs Tunisia, an accelerator programme and early-stage venture capital fund backed by the World Bank’s International Finance Corporation (IFC) arm and supported by the Women Entrepreneurs Finance Initiative (We-Fi).

“It’s so much more difficult to access financing than pre-COVID. I’m trying to get credit to open a big two-level flagship store for Fierce, but it’s taking too much time,” she said.

Fierce focuses on sustainability – its best-selling leggings are made from recycled plastic bottles. Other items are made out of reused Tunisian cotton, and Ben Soltane insists on producing in smaller batches to reduce textile waste. 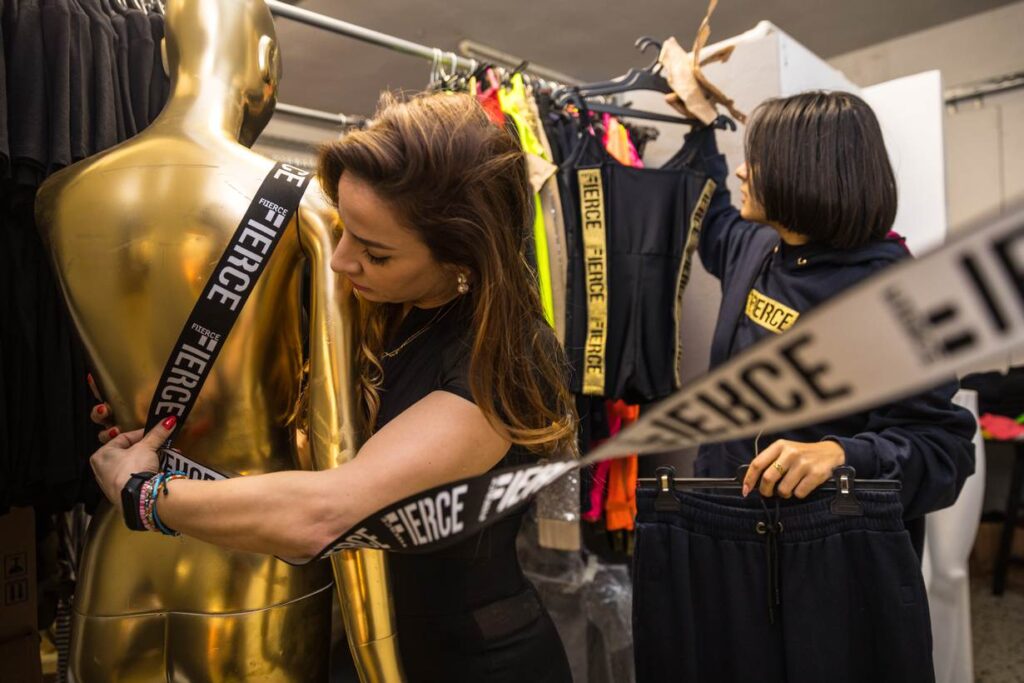 “It’s much more expensive for us because it’s not an economy of scale and to push this eco-friendly product, we kept the margins on those products low to encourage people to buy it,” she said.

The leggings run at 85 Tunisian dinars ($29.60) – much less than brands imported from abroad, on which Tunisia charges tariffs as high as 150%.

It seems to have worked: Ben Soltane said the company’s revenues have tripled in the last year.

For Saudi designer Eman Joharjy, inspiration came from her love of exercising outdoors.

The former financial professional said she wanted to be able to run and cycle outside, but Saudi’s conservative norms mean women wear loose robes known as abayas and cover their hair – making exercise difficult.

The usual skin-tight leggings and t-shirts on sale at shopping malls would not do, so Joharjy designed a “sports abaya” for herself in 2007.

The loose, cotton, one-piece garment had long sleeves, pockets, zippers, and cinched legs – and came in blue, instead of the conventionally black robes.

The first time she wore it out for a jog, she got stares and plenty of laughs. 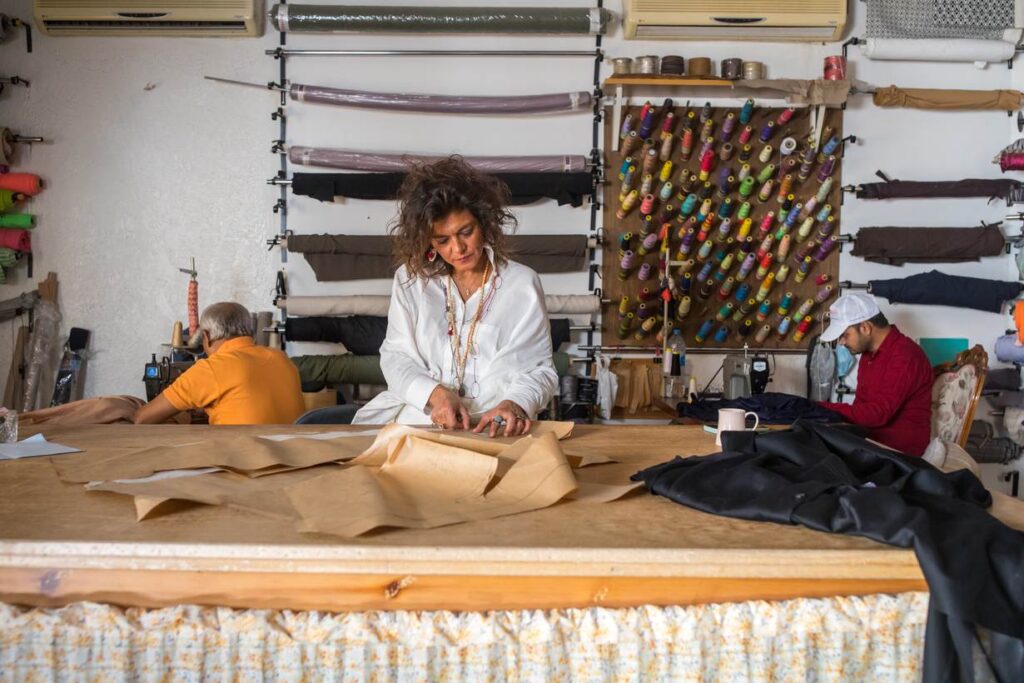 “Little by little, I went from being the joke of the town to the trend of the town – and the sports abaya became a new niche,” Joharjy said, speaking by video call from her studio in Jedda, Saudi Arabia.

“When I see a lady jogging or running with my abaya, I’m like, ‘Yes! Go girl!'” said Joharjy, who is being mentored as part of Vogue Arabia’s 100 Saudi Brands fashion programme.

She has gone on to design pieces for Saudi women professionals – architects who needed to be on construction sites or photographers who needed big pockets for their lenses.

“I wanted to give women more access to the public space to say, we are here, and we can do anything,” she said.

Other designers across the region have begun producing sports abayas – but Joharjy is not fazed.

“It’s beautiful to be a trend-setter,” she said.

(Reporting by Maya Gebeily; Editing by Helen Popper. Please credit the Thomson Reuters Foundation, the charitable arm of Thomson Reuters, that covers the lives of people around the world who struggle to live freely or fairly. Visit http://news.trust.org)